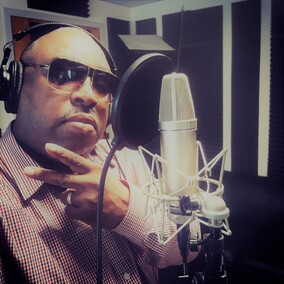 Meet Smooth P DaBishop who has been producing music for twenty (20) years plus. First and foremost he prefers it be known that he is a Minister of Music. His musical talents were clearly evident from an early age when he started playing various instruments such as drums, saxophone and the keyboard. By the time he was 17 he was writing and producing his own music. As a senior in high school he discovered that he had a talent for rapping. Soon he was serving as a Minister of Music at Refuge Temple Revival Center in Indianapolis, Indiana where his parents pastor. District Elder and First Lady Paul and Margaret have served that congregation for several decades. It was at Refuge Temple Revival Center that he honed his musical skills. Smooth P’s talent was noted by three prominent record labels.

As a result, he has produced over six (6) CD’s which have ministered to many and caught the attention of several prominent artists in the Midwest including Jeffrey Pitts. Jeffrey Pitts has a unique ministry to the local population and SmoothP has served as his executive producer on two of his CD’s. Smooth P has a heart for the youth in our city as well, thus he organized an event called “Gospel Rap” which proved to be so successful that it has become an annual Gospel Event in Indianapolis for the last ten years. An artist and producer in his own right Smooth P has shared the stage with National recording artists including Tonex, Ben Tankard, Ricky Dillard, L.G Wise, Righteous Riders, Darius Brooks, Gospel Gangstaz, Broderick Rice and others. His love in serving others through ministering in Music via producing and performing is evidenced by his large client base of artists he works with. SmoothP’s favorite Scripture in the Bible is “No weapon formed against me shall prosper.”

Smooth P is a compassionate Man of God who follows in the steps of his Savior by ministering to those who are in prison, homeless shelters and the sick in hospitals. He endeavors to help the less fortunate by ministering to them with his faith thereby helping them achieve victory helps achieve victory over their brokenness and obstacles.
Sound Bytes